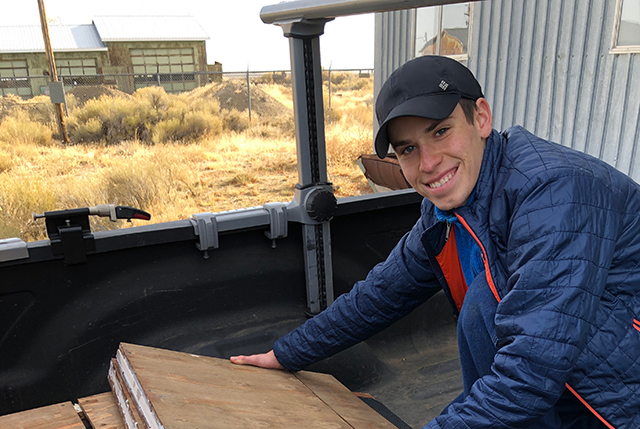 James Lane was a junior at Catlin Gable School in Portland, when he attended a spring program in 2019 at Malheur Field Station to build bat boxes.  James’s stepfather, Scott Bowler was to lead the group and at the last minute couldn’t make it.  The students built and repaired bird boxes during their stay instead.

James said “I’m interested in conservation and my step father, Scott Bowler introduced me to the Malheur Field Station. James couldn’t forget the bat boxes and their importance on the refuge.  “It seemed a good way to combine my interests into a school project.  According to Alexis Martinez, biologist at MNWR says “There are 15 species of bats in Oregon, twelve of those species are found at Malheur”.  Test results in 2019 yielded information that the 12 species on the refuge are free of white nose syndrome, a fungus decimating bat populations in some parts of the country.  According to MNWR, bats eat insects, including mosquitoes and are a food source to hawks, owls, and some snakes.  Weasels and raccoons will climb trees to get them.

James is an incredible young man with no doubt a bright future.  We are thankful to James and his stepfather Scott for their time and donation to the Malheur Field Station.  We may not see James for a while, as he is heading farther east to pursue his studies at Colby College in Maine.  We wish him success and hope to see him again on station in the future.

August 17-21, 2020
Join us under the darkest sky in the US! Learn about Astronomy and Astro-Photography in this 4 day course.

Sept 2-5, 2020
"Learn more about the insects of the sagebrush country and their importance to the ecosystem"

September 23-29, 2020 Ever wonder how the landscape of Harney County came to be?

Geology of the Northern Great Basin

September 25-30, 2019-Ever wonder how the landscape of Harney County came to be?

September 16-22, 2019. Join Harry Fuller for a week of birding the refuge and Steens Mountain. Fall migration is always interesting in Harney County.